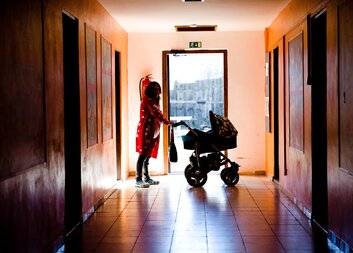 The unemployment rate looks good, but it does not reflect reality. It does not capture the situation of people who are over-indebted, living in precarious situations or working in the grey economy. However, it was these people experiencing poverty who were the hardest hit by the effects of the pandemic; women even more so than men. The new Caritas CARES! report shows a different view of the official figures and highlights how Caritas can help those who are most at risk of poverty.

At first glance, the statistics for the Czech Republic look very positive: around three percent unemployment rate and at risk of poverty rate for workers. However, a slightly different reality is revealed when we dive a little deeper into the statistics. About 760,000 people in the Czech Republic have had assets seized to repay debts, about 400,000 to 500,000 of them have five of more additional debts which they cannot repay and which therefore incur penalties and interest, creating a debt spiral. Due to the over-indebtedness of such a large part of the population, the Czech Republic is relatively unusual within Europe. However, since wage deductions do not appear in Eurostat figures, many more working people are at risk of poverty than the statistics show.

"Our regular Caritas CARES! report on the social situation in the Czech Republic provides a deeper insight into an area in which Caritas is practically irreplaceable. Thanks to our nation-wide network, we know the real situation of people experiencing poverty and people at risk of poverty, and thanks to a group of experts and cooperation within the Pan-European Caritas network, we can analyse the environment and suggest ways to improve the social situation. Our activity is unique in this," comments the Director of Caritas Czech Republic Lukáš Curylo.

The labour market is not for everybody

Even if we look at individual groups, the picture is misleading. We have lower unemployment of young people compared to the rest of Europe. Yet, it is at 8 %, and 9.2 % for young women. Unemployment of women is higher in all categories. Long parental leaves (the usual length of individual care for one child by one of the parents is two to three years in the Czech Republic), insufficient supply of affordable childcare, and unpreparedness of employers to meet the needs of parents with a part-time job or more flexible working hours, the labour market loses unnecessarily valuable capacity.

Other groups at risk in the labour market are people with low qualifications, the elderly and people with disabilities. The long-term unemployed, over-indebted people and ethnic minorities (mostly Roma people) are virtually excluded. The already mentioned large group of over-indebted people has a very difficult position, since the state imposes enormous administrative demands associated with heavy fines on employers. It is often disadvantageous for an employer to employ a person whose debt repayment is being enforced by law, who then is often forced to resort to the grey economy. The debt collection system together with an inflexible system of social benefits does not give other options for working in the formal economy, which leads to a situation where a person has no access to pension.

There is no data on the employment of the Roma population, we can only estimate that they are facing high unemployment, especially in socially excluded localities. Among the Roma population, many people work in the grey economy and therefore without legal protection. The conditions of migrant workers are also often inadequate, they are often exploited and abused. The agency form of employment is problematic since foreign workers often have their documents withheld, they are not paid overtime, they do not get paid their last salary, etc.

“Caritas seeks to be a catalyst for positive change by advocating for what an inclusive labour market should look like – with protected, supported and empowered workers from all back-grounds,” says Maria Nyman, Secretary General of Caritas Europa

Work during the pandemic

The pandemic brought only a small increase in unemployment as employment was maintained by government support. The pandemic hit hardest those who already had an unstable position in the labour market, i.e. part-time workers and workers unprotected by a contract. But they do not get into the formal statistics. People with lower levels of education, households with children and workers in trade and services are also at greater risk of poverty. The growth of poverty is illustrated by the sharp increase in interest in food and material aid, which Caritas provides in cooperation with the network of food banks.

A survey of single-parent families showed that half of them became indebted during the pandemic due to the loss of income, with women being affected more than men. Wages are lower for women, there are more women working in sectors affected by the pandemic and women often work in precarious positions.

The crisis also affected workers in the caring professions, especially in the long-term care sec-tor, as support initially focused on hospitals only. During the following waves of the pandemic, this was reversed and care workers also began to be perceived as important.

In the Czech Republic, social enterprises mainly employ people with disabilities, with only a small portion focusing on the socially disadvantaged. Another important role of social enter-prises is encouraging the long-term unemployed into work.

Caritas social enterprises have encountered the following issues related to the COVID-19 pandemic:

The report also includes research on the impact of the pandemic on Caritas’ services, the people Caritas serves and its employees, and an analysis of employment policy measures at the national and EU levels.

The analysis led to the proposal of the following measures, which are detailed in the report itself.

At the national level:

At the national and EU levels:

The Caritas CARES! poverty reports are an ongoing series of reports based on grassroots realities that Caritas Europa produces biennially covering a particular social policy topic. They aim to support the advocacy efforts of Caritas at national and European levels, and endeavour to ensure that the voices of the most vulnerable members of society are heard. This particular set of reports builds on Pillar II of Caritas Europa’s Social Model on inclusive labour markets for all – work as a source of well-being. The reports focus on the challenges that should be urgently tackled at national and EU level and identify the national and EU policies that should be put in place and conclude with policy recommendations for the European Commission and Member States. The European report brings together, compares, and analyses the data and trends of the 18 national reports on the same topic.