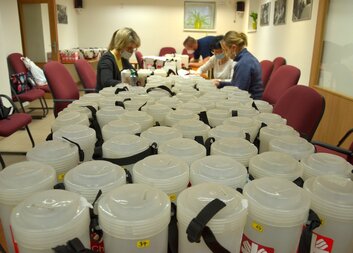 The Three King’s moneyboxes unsealed – donors supported the collection with 80 million. Thank you!

The donations from the Three King’s moneyboxes have been counted and its total amount reached 52,3 million. The online carolling on the website of the collection brought another almost 24 million and over 4 million came through generous donor DMS. In total, this year’s Three Kings Collection brought 80,3 million for those in need. Even though the last year’s collection was by 50 million higher, such a good outcome was not expected this year. The epidemiological situation changed the form of the traditional collection – the carollers could not go into the streets. You can still support the collection online until the end of April by DMS or yearly by bank transfer.

“I’m very grateful and would like to thank everyone, who took part in the collection and who donated money, especially in such difficult conditions. The desire to donate to the collection was astonishing and it proves the fact that it has become a part of our lives. Thanks to the surprisingly high financial donations, we will be able to help better those people that are in need or on the edge, often in a situation, in which they cannot help themselves. People that were affected by the coronavirus pandemic will also receive help,” said Lukáš Curylo, director of Caritas Czech Republic, which has been organizing the collection for 21 years.

The strict regulations did restrict the human contact and have made the dressing up in traditional costumes of children or the youth impossible, but they have supported the human ingenuity. “Usually, the carollers dressed up as the Three Kings came for the donations, however this time the donors came to us, to our static moneyboxes in municipalities, churches, shops or pharmacies,” says Marek Navrátil from Caritas Konice about the unusual situation, which occurred after the carollers could not go into the streets because of the governmental regulations. The prohibition of carolling started a wave of creativity, willingness and helpfulness, which took even long established organizers by surprise. “Assistants, coordinators, volunteers, mayors of municipalities or donors were incredibly open and helpful. Often new cooperations with parishes and municipalities started. For example, people from the Brno district Nový Lískovec published the information about the collection in the local newsletter Lískáček. For the very first time we have placed the moneybox into the Church of St James in Brno or the kindergarten in Kohoutovice,” says Veronika Slavíková from Diocesan Caritas Brno. Companies have also offered a helping hand. For the first time the moneyboxes were also at gass stations – in Břeclav region or near Obřany.

An unusal experience was awaiting customers of the Bílčice bakery on the Jesenická street in Bruntál. The shop assistant sang the carol with a Three King’s crown on her head to those who donated to the collection. The baked goods are sold here by Věra Hlavíková, who has been visiting the neighbours with a group of Three King’s carollers for the past eight years. Since she could not go out this year, she has done the carolling in the shop.

In Jeseník the moneybox travelled across all departments of the local police station. “We are happy to help the needy citizens of the Jeseník district in this way. It is a tiny drop in the ocean, but even this drop can significantly help. We never know, when will we need the help ourselves,” said Ludmila Andělová, director of the Jeseník Police, who was the first to donate.

The carollers were missing in the kindergarten in Odolena Voda as well. Even though they were not able to come, all eleven classes, parents with their children and the staff took part in the collection. They donated over CZK 18,000 to the nearby Caritas Neratovice.

Local media helped with the spread of information in many municipalities. Gazettes, newsletters or local radio stations helped to inform even those, who do not use computers or smart phones. For example in Libníč near České Budějovice they repeatedly played the Three King’s carol from the loudspeakers and informed the citizens about where and when will they be able to reach a volunteer with a moneybox.

To municipalities, where there is no shop or local authority, the volunteers drove the “mobile static moneyboxes” in cars. The moneybox was then in place attached to the car window, in order to follow all the regulations and reduce the unnecessary contact between people. In the municipality Sobotovice in the Brno region, the moneybox was carried by the volunteer firefighter’s car.

The Three King’s moneyboxes were waiting on the mountain tops as well, specifically (same as last year) in the stands on top of Lysá hora and this year, for the first time, on Praděd or in the window of a hotel on Křemešník in the Pelhřimov region. In a visitor’s centre on the square in Nový Jičín they have gradually filled four moneyboxes.

The unique “Three King” figures were auctioned at the of January on the Aukro portal for CZK 22,200. This money was also added to the Three King’s Collection. The brewery Koníček from the municipality Vojkovice near Frýdek-Místek has prepared a Three King’s Special in honour of the collection. By purchasing this 13-degree semi-dark beer the people supported the Caritas with CZK 30 (total amount of this event was CZK 23,190). In the city of Tábor in the South-Bohemian region they used print media. They produced 18 700 pieces of Three King’s postcards, which were distributed to people by the Czech Post at the end of December. Positive response to this event was visible also in the online results of the collection.

The carolling was also missed by children, who could not visit and cheer up their neighbours. In Lipovec in the Blanensko region students with their supervisor at least marched to the church and back. With a guitar, dressed in the king’s costume and all “black”. They referred anyone, who wanted to donate to the collection, to the local shop with a moneybox. In Březnice in the Zlín region they went even further. The carollers were silently walking around with a consecrated chalk, but without the moneyboxes. Those were waiting for the donors at the local authority, local shop and in the church.

“People were asking, where the moneyboxes are, they were willing to drive to the place, so they could donate money into the moneyboxes in “their” municipality and bring back some sweets, calendars, and somewhere even a piece of the consecrated chalk to write a blessing on their doors. They even offered to take the static moneyboxes themselves, which made the situation easier,” says Martin Hořínek, director of Caritas Frýdek-Místek.

Many activities were held online and on social network, where the carollers were especially active this year. They were excited and ready for the carolling the entire month of December. In the South Bohemian Region the virtual carolling was filmed in Katovice, Nové Hrady, Pelhřimov, Suchdol and also Veselí nad Lužnicí.

Where the money is saved

In connection with the mentioned difficult situation, the outcome is very good and much better than expected by the organizers, however, noticeably lower than in the previous years. According to Šárka Hájková from Litoměřice, coordinator of the collection, this experience proved that the little singing carollers in the streets are irreplaceable. But the outcome of the collection is accepted with joy and thankfulness. Although some of the planned projects of help for people in need will have to be limited or changed due to the lower proceeds. “Missing parking places in front of the Hospice of St Like will not be built this year, however the money will be used in the reconstruction of a low-treshhold day centre for homeless women and men,” says Martin Pražák, director of Caritas Ostrava.

“This year’s lower proceeds will limit the purchase of facilities for the disabled, activities for the clients and purchase of groceries, school and hygienic supplies for the needy, but we will try to obtain the money elsewhere,” says Růžena Kavková, director of Diocesan Caritas Litoměřice.

The collection into the moneyboxes ended on 24 January, but it is possible to donate to the collection until the end of April online on the website www.trikralovasbirka.cz . On the same website you can read, where exactly is the money in individual Caritas across the country used. The Three Kings Collection is active also on Facebook, Youtube and Instagram.