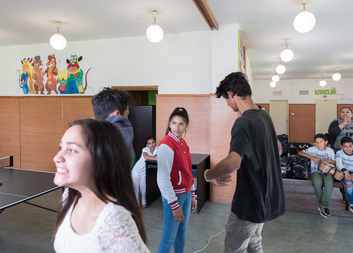 Caritas new survey: twenty per cent of young people are at risk of poverty

To take a closer look at young people at risk of poverty and their biggest problems, as well as to find out how true the received ideas of poverty are, this was the basic motivation to prepare the survey organised by Caritas Czech Republic and the Czech Bishops’ Conference together with the firm Median. It confirmed that for young people, the issues of housing, indebtedness and access to employment are the most serious problems.

We have been dealing with the most vulnerable people in Caritas and in the Catholic Church for a long time. We chose young people and poverty as a topic for this year, and in February we presented a report based on the expert knowledge of our field workers. However, we also wanted information from the young people themselves, people aged 18 to 30. We have confirmed that what matters most is the conditions one is born into. The experience of losing home appears to be critical: in those who have experienced it significantly increases the likelihood of poverty. "It is clear that a part of the population of the Czech Republic have inherent disadvantages in their lives. The people of Caritas Czech Republic help them overcome the resulting obstacles and in difficult moments they try to stand by their side. In addition to direct assistance, however, we are also seeking to improve the social system through advocacy activities directed at the legislators," says Lukáš Curylo, Director of Caritas Czech Republic.

Family and education have the greatest influence on poverty prevention

The most important factor influencing youth poverty in the Czech Republic is the family, and specifically its financial situation and behaviour. This is followed by their own education and employment. Larger families (with both parents) find it easier to manage risks.

In general, a higher proportion of people at risk of poverty are found in households with a small number of members. In preventing poverty, the family's support is therefore most important, but motivation for education also matters. "We see that a functioning family is the most effective in prevention of poverty and falling into debt traps among young people. A good family background is crucial for starting a separate life both in terms of shaping personality and motivation for education and from the point of view of material and financial support," says Stanislav Přibyl, General Secretary of the Czech Bishops' Conference. "We therefore consider family support and motivation for education to be crucial."

Women, parents and less educated people are more at risk

Significantly more poor young people are among women (27 %) than among men (18 %). This is related to lower incomes for women, their greater economic dependence on the family or partner in studying or caring for children. A third of single parents with children (including single parents) are also at risk of poverty. In doing so, wider families and childless couples are better at dealing with the risk of poverty. Research also confirms that poverty among young people is linked to educational attainment. The group of young people without maturita, whose parents also do not have maturita (every other), is most at risk. In total, an alarming 40 % of young people without maturita are at risk, compared with 13 % with higher education. Already, maturita statistically significantly reduces the risk of being caught in the poverty trap.

Everyone keeps an eye on their spending, but a sudden 10,000 crown outlay can't be managed by the poor

While the financial management of young people at risk of poverty and that of those who do not suffer from poverty differs in many ways, it is surprisingly similar in one respect. As for material supplies, holidays and new furniture are the least affordable for young people. Basic existential needs such as heating or food are not a problem even for those at risk of poverty; only 15% of them are not able to sufficiently heat up their apartment or house. The financial obligations of poor and non-poor young people are similar (with the exception of distraints). If they had obtained 10,000, both groups would most often set it aside. Although they may differ in ‘financial literacy’, they have about the same overview of their spending: most respondents have at least a rough idea of what they spend, modern methods of monitoring expenses (mobile apps or Internet tools) are used by more than a quarter (on average 27%) of young people.

However, almost three-quarters of poor young people have trouble making the ends meet and there is a difference in the event of sudden spending of CZK 10,000, which they can't handle. If this situation is combined with a poorer financial background of the family or even with the absence of a family background, this group is much more prone to be over-indebted. That is why they use non-standard financial products (consumer loans, overdrafts), and 9% of them have experienced distraint.

Consumer behaviour also differs: half of the young poor feel, instead of pleasure of a medium-sized purchase (such as new shoes), that they will not be able to pay for food, for example. In the case of unpredictable income, the poor would then more likely to pay for operating expenses, such as rent or debt repayment, or to help the family, while young unthreatened by poverty would rather spend money on their personal development, hobbies, holidays, or make an investment.

Family experience and heredity of poverty

In terms of the risk of poverty, the experience gained in youth and early adulthood is important. The positive ones subjectively help to overcome poverty better. A more common sign of young people at risk of poverty is that their families have been indebted several times, that they come from incomplete families and that they have often moved house. The experience of housing loss then seems critical. The less vulnerable who went to a multi-year grammar school and their families supported them in study and travel. The heredity of poverty is not absolute, and not all who suffered material deprivation around the age of 12 experience it in adulthood. However, the probability of this development is almost three times higher in them.

In adulthood, young people at risk of poverty experience the same problems as their parents, and to a similar extent. More often, they experience an unplanned debt, loss of housing or work, the birth of a child, or personal experience of violence. By contrast, positive experiences are similar for both groups. Material and financial support from the family or friends is almost the same. However, young people at risk of poverty are more likely to receive gifts, inheritance, savings or contacts, while those at risk receive help from the family in emergency situations or childcare (prevention versus dealing with consequences).

Those at risk of poverty (65 %) are more likely to know a poor person; half of them have such a person in their family or among their closest friends. In 10 % of cases, they are partners. Of the young non-poor people, every other one knows a poor person, and a close person in 30 % of the cases. As the research confirms, the impact of the environment is great and the proximity of poverty is often related to attitudes towards it.

Almost half of the young people who have poverty-stricken people in their neighbourhood tried to help their peer in financial need. Of the total number of young people, it is more than a fifth (22 %) who gave a helping hand, whether they have someone close to them or not. It can also be close to the people they help, or more extreme levels of poverty and problems. Close people are helped by young people more with cash donations, more distant ones with a loan. The poor also donate money more often to the family and lend the non-poor again. However, the survey did not examine the amount of such assistance. Non-poverty also helps more often in the form of advice, motivation or mediation of assistance. "The willingness of the young to help those in need in the family and among peers is good news that corresponds to the evangelical 'For I was hungry and you gave me something to eat, I was thirsty and you gave me something to drink, I was a stranger and you invited me in' (Mt 25,35-36) or the Old Testament, 'give some of your food to the hungry, and some of your clothing to the naked. Give all your surplus as alms' (Tob, 4, 15a, 16a)," commented Stanislav Přibyl. "We are very pleased that we have not confirmed the hypothesis about the selfishness and exclusive nature of social groups among young people."

The state should help more, non-profits should run jobs centres

According to young Czechs, the most common causes of poverty are factors on the individual's side (predilection for comfort, unwillingness to work, to seek education, dependency), but according to them, poor family backgrounds and some systemic deficiencies (distraints and expensive housing). If young people know someone poor, they are more careful in determining the reasons, and they tend to place the blame on the system. According to the young, only family and the neighbourhood are sufficiently helpful to the poor, and above all, the state should help more than it does. All groups of respondents agree that debt prevention, affordable housing and job support are most important in the fight against poverty. In all, 80 % of young people consider it important to be helped with finding the first job and to increase the availability of nurseries.

According to all young people, non-profit organisations should focus on work (62 %), legal and civic assistance (52 %). Young people themselves would also welcome assistance in social housing, material assistance and the mediation of social loans. The best known emergency aid measures provided by Caritas are according to young people sheltered facilities for mothers with children or individuals, social housing and material assistance. By contrast, respondents are often unaware of low-threshold centres, halfway houses, socio-activation activities or social rehabilitation, which are in fact the most frequently used charity services. "Research has confirmed that the views of poverty and reality vary greatly. While general judgment is that poverty is the result of individual failure and irresponsibility, the data show that poverty is the result of a number of disadvantaged societal factors. And young people who have direct or indirect experience with poverty then look at the poverty of others with less prejudice," adds Lukáš Curylo.

We chose the topic ‘Young People and Poverty’ as part of a joint project of the Czech Bishops' Conference and Caritas Czech Republic supported by the Renovabis Foundation for the whole year 2018. The Young People and Poverty survey was carried out in April 2018 on a representative sample of 800 young people aged 18−30 living in the Czech Republic. The research was prepared for Caritas  Czech Republic and the Roman Catholic Church by the firm Median. PhDr. Kateřina Pulkrábková (CBC), Mgr. Martina Veverková and Mgr. Simona Juračková, Ph.D., (Caritas Czech Republic) and the Median team headed by Daniel Prokop worked on the brief for the study and its assessment.