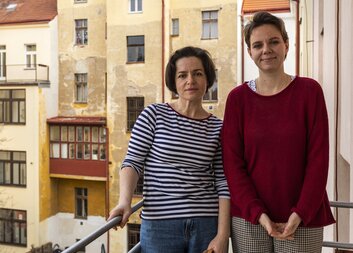 A story from Ukraine: The last straw

On Monday, March 7, after five o'clock in the morning, a rocket flew into my apartment through the window," recalls Marina, a sympathetic black-haired lady in a striped T-shirt, showing us a photo of a damaged panel house on her tablet.

This very strong "abstrel" was the last straw for her. In agreement with her friend Anna, she threw a few essentials and identity documents into her bag, and together with Jersey, the Labrador, the two women went to the railway station in Mykolaiv (Nikolaev, Russian), a half a million city in southern Ukraine near Odesa.

Anna also recounts the fateful morning when she heard machine gun shots barking in the streets. "Ta, ta, ta, ta…," he shows the cadence of the bursts with her hands. "It was awful." She packed her personal identity papers, and her laptop grabbed her suitcase and hurried to Marina at the train station crowded with mothers and children.

This was followed by a week-long journey: first, a train from Mykolaiv through Odesa to Chisinau, and from there by bus to Bucharest, followed by Budapest, and eventually Prague. They took Jersey the black dog with them, having not found any acquaintances who would take care of her, and they did not want to leave her to someone they don’t know. She didn't even bark along the way. Only in all that confusion, did they leave her documents at home. They were pleasantly surprised that their dog got microchipped for free by a Czech veterinarian in Prague.

"I wanted to go back home to Chisinau, even despite the bombs," cries Anna, an artist by profession. A children's book with her illustrations was to be published in her homeland Ukraine this spring. "Half of the pictures are ready, but the publishing is probably not going to happen," Anna complains. "Thanks to the computer I can paint from anywhere, but now I would take any other job," she adds.

Both women were looking for a job in Prague, and they both spoke English. Of course, they also speak Russian but they are now ashamed to speak this language in public, as they do not want people to think they are Russians.

"You can't imagine how heart-warming the solidarity of the Czechs is to us. Our blue-yellow flags in the streets of Prague. We are very grateful for the warm welcome," they both say. They found their first refuge in the Marianeum Hotel in Prague, a training center of Caritas Czech Republic. Anna provided one of her romantic illustrations to Caritas for the Easter greeting card.

The artist Anna along with other creatives were temporarily offered a house where they could create. She gladly accepted the offer. Marina stayed in Prague. The two are in contact and like to recollect the help they received from Caritas.