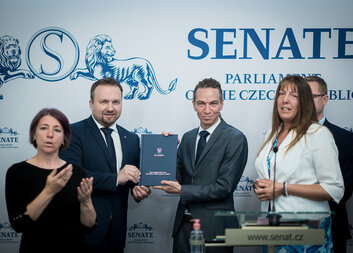 On Tuesday, June 7, experts from the Za bydlení initiative submitted a bill on housing support to government representatives. Housing shortage has been a burning issue in the Czech Republic for several years. The availability of housing is constantly deteriorating, so it is important to address the deepening crisis. The current government has pledged to prepare legislation to help find a way out during the first two years of its term.

The Za bydlení initiative, of which Caritas Czech Republic's advocacy manager, Iva Kuchyňková, is also a member, prepared a Report on housing exclusion last year. It follows that roughly one in ten people in the Czech Republic is facing housing shortage. In addition, the number is expected to increase as a consequence of the sharp rise in energy prices and rising inflation.

In the Czech Republic, there has been a lack of effective legislation that would improve the housing support system for more than a decade. “The solution promoted by the Za bydlení initiative is not an unsubstantiated solution. We build on proven measures and innovations that have already proven themselves in municipalities and the state in practice,” says Iva Kuchyňková. The processing of the bill, which the initiative passed on to government representatives, involved a wide range of people, from authorities representatives and municipalities to social workers who see the pitfalls of housing deprivation in practice.

The key points of the proposal include a system of guarantees for landlords or a network of contact points for housing support in Czech municipalities. Representatives of Czech municipalities claim that housing shortage would be fundamentally improved by better support in setting up social housing, as well as greater investment in the housing capacity or systematic financing of social work.

“Many examples of good practice are already being applied in municipalities – from counselling in housing contact points to housing support in the private sector using a guarantee for apartment owners as well as the building of affordable and social municipal housing,” said Deputy Prime Minister for Digitisation and Minister of Regional Development, Ivan Bartoš.

The Za bydlení initiative views the cooperation with the government officials positively and hopes that the new law addressing the current housing shortage could come into force in about two years. “We are pleased that the current government is listening to experts and taking the current housing shortage crisis seriously. We also appreciate the promise of an invitation to cooperate regularly in the further preparation of the relevant legislation. We believe that the current government will take seriously their programme priority to enforce the law on housing support and at the same time that it will continue to take into account the suggestions of representatives of experts, local governments and civil society when preparing and passing the law,” adds Iva Kuchyňková.

Za bydlení is an initiative bringing together individuals and organizations from the non-governmental, academic and public sectors. Since the last election period, it has been trying to evoke and lead a constructive public and political debate on the problem of housing shortage and the deteriorating availability of decent housing in the Czech Republic. Its main goal is to enforce a functioning institutional and legislative model that will prevent people from falling into homelessness or into the poverty business network.