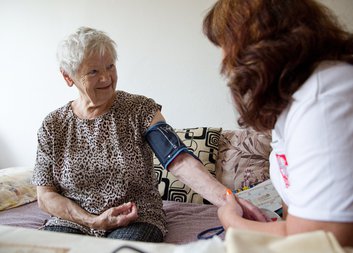 It's buttoned up! Home care gets extra cash, readiness for strike action is over

Readiness for strike action is over. The home health care segment is expected to receive about 30% extra cash next year. The Board of Directors, the highest body of Caritas Czech Republic, therefore decided to end the current strike action of the nurses, which had lasted more than a year. Home care can continue.

According to calculations of experts from organizations that negotiated the funding terms with health insurance companies, the Ministry of Health and the Prime Minister for over half a year, an extra 8,000 crowns gross will go to nurses’ wages and salaries.

They were helped greatly by the support of the 70,000 citizens who signed the ‘Home Is Home’ petition. The final negotiations were very challenging and very tense. "Almost until the last moment before the publication of the Health Ministry's Reimbursement Decree, we did not know how many of our demands would be met," says Ludmila Kučerová, Caritas chief negotiator. "We have not been able to push through everything, but even so, the overall increase is roughly 30% more than this year."

We managed to negotiate an increase in the super-gross wage of nurses in home health care by CZK 10,000, so the nurses will receive an extra 8,000 gross. There will also be a better points score. They have managed to negotiate payments for unfair regulations for last year and this year. This step should ensure the rescue and stabilisation of a long-term underfunded yet very effective public health service.

"As a representative of the largest home health care provider in the country, I would like to thank especially the partners in the segment: Association of Home Care, Czech Association of Nurses – the home care section – and the specialist company Gratia Futurum 913, with whom we jointly pressed our claims. I also want to thank the health unions and the ‘Crisis Staff Against the Collapse in the Health Service for their support," said Lukáš Curylo, director of Caritas Czech Republic.

A big thank-you goes to our home care nurses, who worked in difficult conditions and also to all the employees who supported them in the protests. In a stressful situation, it was confirmed that we were one big charity family. A great thanks for the support goes to our founder, the Czech Bishops' Conference. I must not forget all the important personalities who have shown us their sympathies and all those who signed the petition," added Lukáš Curylo of Caritas Czech Republic.

A series of difficult negotiations on funding for home health care for next year began in the spring of this year. After 98% of care providers failed to agree on its form, Caritas published a petition called Home is Home. It was signed by 70,086 citizens over three months.

Thanks to the petition, representatives of domestic health care managed to initiate a public hearing before the Petitions Committee of the Chamber of Deputies in early October. During subsequent repeated negotiations with the Prime Minister with the participation of the Minister of Health, we have achieved a change in the Reimbursement Decree for the next year as well as the Wage Indices.