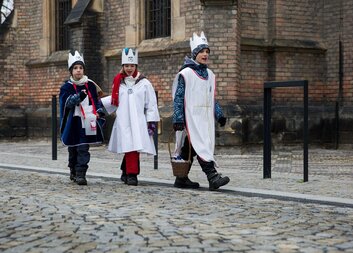 Now we know the contents of all the moneyboxes – and it's a record high! The Three Kings’ carollers pulled out all the stops, the donors were extremely generous, and we can help people in need better. Such is the bottom line of this year's Three Kings’ Collection. Donors put into almost 25,000 moneyboxes coins and banknotes totalling CZK 130,331,872, and another CZK 922,151 came through donor SMS during the broadcast of the Three Kings’ Concert on 5 January on CT1.

"The amount collected broke by more than 11 million last year's record, which is good news about the generosity of our fellow citizens," says Lukáš Curylo, director of Caritas Czech Republic. "Thanks to the good proceeds we can help more and better – people with disabilities, the sick, the elderly, families and children at risk of social exclusion. I thank everyone who took part in the collection, that is approximately 75,000 volunteers, with special thanks going to the child carollers, but also to the coordinators and everyone who supported the Three Kings’ Collection this year with their commitment or a cash donation," says Lukáš Curylo.

A big thank-you also goes to the workers of municipal authorities, who selflessly helped with the unsealing of 24,993 moneyboxes. "We especially thank the partner of the Three Kings’ Collection, Česká spořitelna, whose employees have counted the 130 million crowns in banknotes and coins free of charge over 14 days, so that money can be deposited on the Collection account," says the collection coordinator Gabriela Víšová. According to her, the collection involved many pleasant and joyous meetings. "I believe that the children and the adult carollers really enjoyed it," she says.

The amount of money broken down by region can be viewed on the website www.trikralovasbirka.cz/vysledky. The data are entered in the tables directly by local coordinators of the collection. All the money will now be held on a central collection account and all the documents will be checked.

As early as the spring, this year's Three Kings’ cash will start helping people. From the central account, the proceeds will be distributed according to an internal formula as follows: 65% of the funds will be returned to the Charites that collected them, 15% is earmarked for major Diocesan projects, 10% for development projects abroad, 5% for Caritas Czech Republic projects, and 5% is the statutory overheads.

In the regions, the finances will support local plans, pre-approved "mini-projects", such as caring for people with disabilities in sheltered workshops of Caritas Opava, support for the field care service Caritas Beroun, the acquisition of a wheelchair lift for clients of Svitavy Charity Care Service, support for St Paul’s Home for the Elderly, a crisis facility for women and short stay hospital Pohodička in Rokycany, purchase of compensatory equipment for home health and hospice care in Přerov, or purchase of a car for the field care service regional charity Třebíč. These can be found on the web: www.trikralovasbirka.cz/vyuziti.

Some of the money will be sent abroad to assist, for example, a project for sustainable plastic recycling in Mongolia, improving the quality and availability of home care services in Moldova, and an agricultural productivity improvement project in Zambia.

History of the collection

The first collection took place in 2000 in the Archdiocese of Olomouc. The carolling has been done across the Czech Republic since 2001, and the yield of the Three Kings’ Collection is increasing every year. This year (2020) the Three Kings’ Collection took place for the 20th time. The collection is open year-round – it is possible to contribute to account 66008822/0800 with Česká spořitelna, variable symbol 777, by bank transfer and online by credit card. The collection can be supported one-time or permanently by sending a donor SMS to the number 87 777 in the form of DMS KOLEDA 30, DMS KOLEDA 60 or DMS KOLEDA 90, DMS TRV KOLEDA 30, DMS TRV KOLEDA 60 or DMS TRV KOLEDA 90.

Three Kings’ Collection is the most successful collection in the Czech Republic. At the beginning of January (1.–14. 1.) children disguised as biblical Three Kings tell people in the streets that the Saviour was born for them in Bethlehem. They sing, wish people a happy new year, hand out small gifts – calendars, packaged sugar – and write blessings on doors. In doing so, they collect money in officially sealed moneyboxes. With this money, hundreds of projects are supported every year, small projects for people in need. Since 2001, the collection's yield has been increasing every year; last January it exceeded CZK 120 million. More about the collection: www.trikralovasbirka.cz